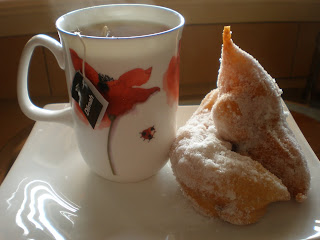 The other day at work I was faced with a bit of a problem. We had 150 booked in for an all day function with many dietary requirements to juggle. All was well until afternoon tea when.... my gluten free meals wnt missing!
I have no idea where they were- I hadn't eaten them! But I had 15 mins to come up with an alternative that was yummy, quick, and of course, gluten free. No ovens were on, there was only rice flour on hand.... I thought of churros.
With deep fryers on 12hours a day, that was one obstacle cleared, so I whipped up the batter, deep fried the little suckers, tossed them in some cinamon sugar, and volia! Sadly there was no chocolate sauce for dipping, just some cream, but at least it was better than a piece of fruit- the ultimate gfree standby in commercial kitchens.

Anyway, I knew I could gussy-up the basic recipe to make it much nicer, and with some minimal efforet came up with these Lavender Grey babies for you dining pleasure! 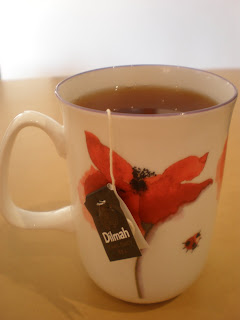 I believe I may have mentioned once or twice how much I love Dilmah Earl Grey Tea, it's sooooo lovely and just right for a pick me up any time of the day, so the starting point for my churros is a strong cup of tea. You could of course just use water, but why not use the best flavour at hand, and of course make an extra cup for sipping while you cook.

First of all, make you lavender sugar. You could use cinnamon sugar if you like, but lavender is just so much more lovely and goes so well with the tea that it's well worth while the effort. 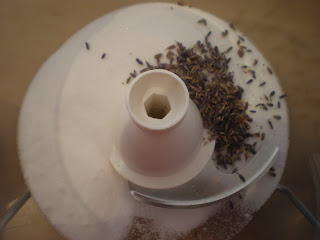 Place the sugar and a couple of tablespoons of culinary lavender buds in the bowl of a food processor. I used Herbies lavender, but you could use some dried buds from the garden if you're sure they haven't been sprayed with chemicals or by a nieghbourhood doggie.
Whizz the sugar around until the lavender is chopped up and distributed evenly through the sugar. That's it, nice and easy. 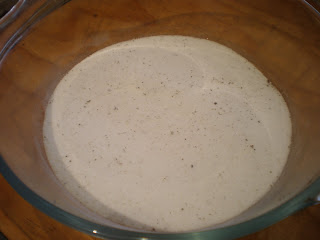 Now onto the churros:

Pour in cup of tea, and mix well. The butter will melt.

Add in the eggs and keep mixing until a nice elastic batter comes together. 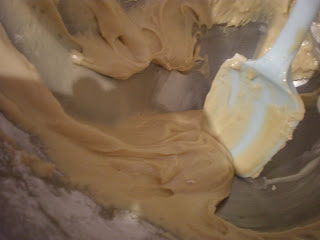 Put some batter into a piping bag fitted with a fluted nozzle. Pipe directly (and carefully) into the hot oil. If you hold it close to the oil it won't splash up at you. The mixture is thick enough to pipe in slowly and not wet enough to spit excess moisture. 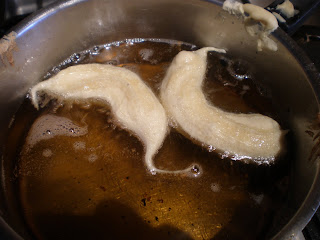 Cook until nice and golden brown, you'll have to turn them over half way through with tongs so both sides share the love. They'll puff up and get nice and fat, so don't crownd the pan or all the little churros will stick together into a blobby mass.

Toss the hot churros straight into the lavender sugar and make sure they're covered top to toe. 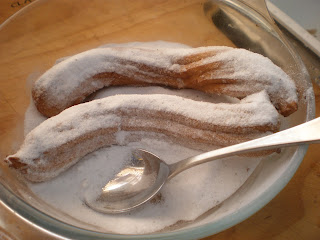 Serve straight away while the little lovelies are warm and crispy. Enjoy with another hot cup of Earl Grey Tea! Not that you need an excuse to sip on a nice cup of tea anytime.

In the spirit of full recipe disclosure, I have to admit that the full rice flour churros stayed crispy longer, but they weren't as fluffy inside. The gfree mix was softer but with more of a doughnut vibe. Next time I might try 1 1/2 cups mix and 1/2 cup rice flour just to see if I can get a longer lasting crunch.

So my Dear Readers, how do you like your nice hot cup of tea?
Posted by The InTolerant Chef ™ at 3:44 PM