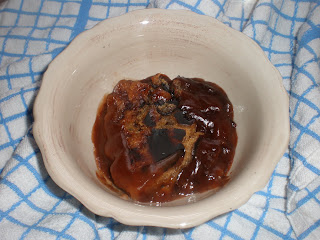 Everybody needs to be able to cook,


even if you do have all your meals prepared by your own personal chef!


It's holiday time here in Canberra, and I've been giving littlej cooking lessons and she's done so well that I've even promoted her to the Shun knives.
I love to teach and explain the why of things, but didn't realise how it would sound to anyone else until the builders- yes, they're back, but new ones this time who do a good job- in the other room called out asking if this was an episode of MasterChef Master Class! I was in the middle of explaining how to hold the knives safely and how to angle the knife correctly, and how NOT to be afraid of them "use strong strong arm motions, knives can smell fear and know when you're not confident" and was a bit embarrased that they overheard, but I bought their silence with warm Brownies..men can be easily manipulated like that!

Although we have been having meals like Pork Terrine and Mango Sago Pudding, today is all about fun, littlej and her friend are up to their noses in flour, gelatine and noodles- thankfully not all in the one meal! Now they're tackling a self saucing pudding and I thought I would post it for posterity.

In my InBox recently was a yummy sounding recipe from Shirley at Gluten Free Easily http://glutenfreeeasily.com/amy-green-simply-sugar-and-gluten-free-cookbook-review-and-giveaway she adapted form Amy Greens new cookbook, Simply Sugar and Gluten Free. http://simplysugarandglutenfree.com/ This is my adaption of Shirley's adaption of Amy's original recipe! I'm sure the original is absolutely fantastic, but as I've said before, cooking is all about adapting to what you have in the cupboard and what you personally can or like to eat.
My recipe is just a little different from Shirleys, whose is just little bit different from Amy's, and I bet your's will be just a little bit different from mine too. Actually, I really hope your's is a LOT different, as littlej and her friend dumped in all the sugar at once and ours was really, really, really sweet!

One of the things I liked in this recipe is that it's cooked in a slow cooker. I know I've got a big oven and all, but sometimes I need it set to a higher or lower temperature for the main course that won't necesarily make for a happy dessert. I figured this type of pudding could tick away on the bench, keeping the oven free yet be hot and ready when wanted. One thing that I didn't take inot account though was that I have a REALLY OLD original crockpot from the 70's. I would loooove one of the new breed, or a fast/slow cooker, but this is what I've got and I think the newer models must work much more efficiently or at different temperatures, because my little crocky took nearly 3 1/2 hours instead of the 1-2 hrs suggested by the original recipe. It wasn't really a problem as I had plenty of time today, but trying to keep 2 excited girls from lifting the lid every 20mins was! Needless to say that a dessert that could have fed a family was devoured by the 2 of them as they declared it their reward for being patient all day. 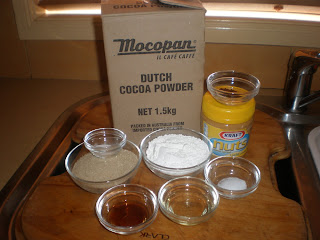 1/4 cup x 2 lots, raw sugar- I think brown would be better though


Spray your slowcooker with cooking oil. 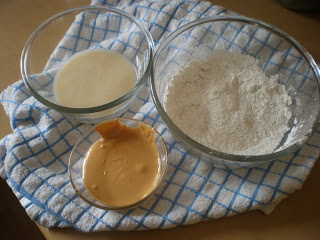 In a large bowl, whisk together the flour, ¼ cup of the sugar- NOT both lots, baking powder and salt.

In another bowl, whisk together the milk, oil, and vanilla.

Heat  the peanut butter for about 30 seconds, just until soft. Add the first bowl of wet ingredients to the dry ingredients along with  the  peanut butter. It's a pretty thick batter, but that's the way it's supposed to be.

Spread the batter evenly in the bottom of your slow cooker 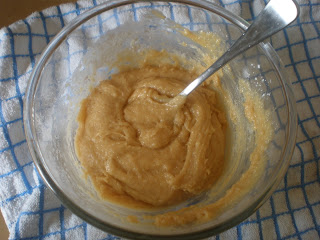 Whisk the cocoa , other ¼ cup sugar, and coffee together. Ladle it carefully on top of the batter in the slow cooker so it doesn't leave holes by just pouring it in. Don't mix the two together as this is the sauce part of the self-saucing! 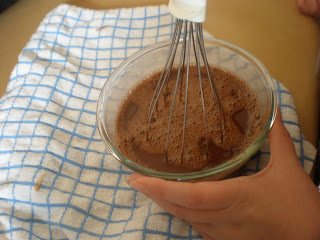 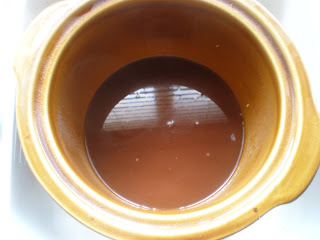 Cover and cook on high for 1 to 2 hours, checking after 1 hour. The pudding  is ready when a toothpick inserted into the center comes out clean. My puddingy bits were sticking out above the layer of sauce below and looked dry and a  bit fluffy. The sauce part is supposed to be wet :) 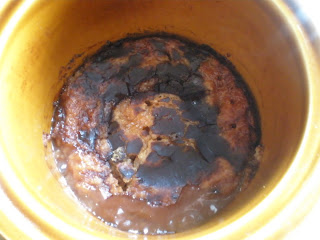 My littlej and her friend R just love peanut butter and declared this pudding  Yummm!


It was easy for them to make together without supervision (except for the sugar) and the fact that it was self saucing made them feel very clever indeed. I fear- due to the calorie content, not yumm content- that it will be added to littlej's regular list of recipes. She's also working on a PBJ version adapting the original yet again!
I hope you don't mind Amy! 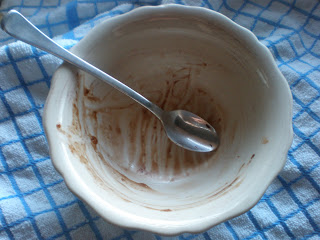 So Readers, how do you keep amused during school holidays?
Posted by The InTolerant Chef ™ at 6:12 PM