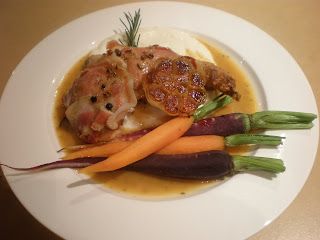 They have a great team working their way through Stephane Reynaud's '365 Good Reasons to Sit Down to Eat' Cookbook. And the blog includes a mix of all sorts of people who cook for fun. In case you missed it, I've done a couple of previous posts- Duck with honey and Rack of Lamb that are also on my blog.
http://blog.murdochbooks.com.au/365-challenge/?currentPage=4
http://blog.murdochbooks.com.au/365-challenge/?currentPage=4


Thanks to shows like Masterchef , rabbit is one of those ingredients that seem to be having a bit of a revival of late.
Just last week I found fresh rabbit in the meat section at Coles , at about $19kg it’s certainly more expensive than chicken but I’m always up for a culinary challenge and wanted to give it a go. My dad grew up trapping rabbits for the pot in the bush, and it was a staple of his family’s dinners, but I have to admit I’ve not had a lot of rabbit before. I remember the odd bunny stew, but that’s about it really. I chose this recipe to change all that.

First step, tackle the beast. The ones at Coles come whole, but this little fella came from the butcher who kindly offered to cut it up for me. I was tempted, but I like to understand my ingredients at a more basic level and decided to go it alone. The bones are not very strong and it’s quite easy to dismember the little bunny, so if you can’t get a nice butcher to chop it up, don’t be afraid to try and do it yourself.

It looks so nude and pathetic laid across my chopping board, I can’t help glancing across at my cat stretched out in the sun and looking for comparisons. I open the cavity and find a little plastic bag with the liver and the find the kidneys still attached, I take these out and wonder what to do with them... they aren’t included in the recipe. I’ve seen Gary and George scoff them down on the telly, so I cheffy them up a little by threading them on some rosemary twigs for a treat to go with the meal. 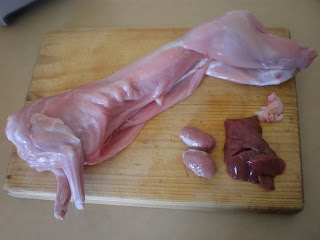 I take off the front legs, cut across the haunches and back legs, then straight through the saddle for two nice pieces. The ribs and belly flaps I trim off and keep, along with the fillets that run down the back, I’ll use these in a nice little pie later. 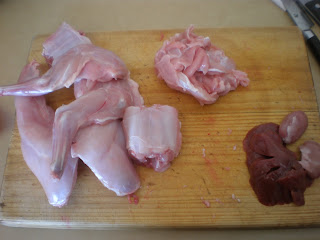 I toast off my peppercorns as my pan heats up, then take them out and add some oil.
The rabbit needs to sear well and get some nice colour on it to develop some flavour and caramelisation so let the oil heat as well before adding the meat. I let these colour on one side and turned them before adding the garlic, shallots, rosemary and herbs as I didn’t want the others burning before the meat was ready as it would add a bitterness to the pan that would come out in the sauce later. Pop the pan into a preheated 180*c oven and let it cook for 30mins. 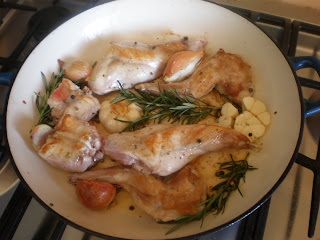 Take the pan out the oven and reset it to 150*c.
Check the meat and see if it needs turning, some bits of rabbit are thinner than others and it can be a bit tricky not to let them cook too fast. Drape the pancetta across the pieces, I put extra on the front legs to protect them. The idea of the pancetta apart from adding flavour is to protect and even baste the meat a little. Rabbit has no fat to speak of and the melting fat from the pancetta will help stop it drying out. Pop the pan back in the oven for another 15mins. 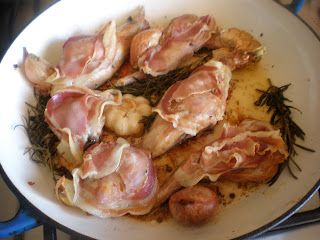 Once you take the pan out the oven again, take out the pieces of rabbit and veggies. I chose to drain the oil from the pan as the sauce calls for quite a lot of butter and if I have to choose a fat to consume I’d rather it be that than veggie oil.
Pop the pan on heat, then deglaze with a glass of wine. 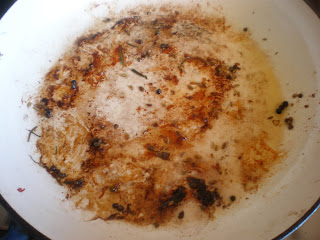 Now the last time I made on of Stephanes recipes, I used the sweet wine in the ingredients list and it was waaay to sweet indeed. Today, I was prepared and used nice dry white instead, there was no point preparing the meal if no one wanted to eat it after all, was there?

While the wine bubbles away, scrape up all the lovely brown bits sticking to the bottom of the pan. Once the wine has reduced just a touch, whisk in the butter to make a lovely silky smooth thin sauce. I also added some more rosemary to lift the flavour of the dish a little and just freshen it up a touch.


Serve your rabbit with some nice veggies and a lovely drizzle of sauce over the lot. I used a creamy cauliflower puree to offset the saltiness of the pancetta, and I couldn't resist adding some carrots to go with the bunny.

The meat was tasty, lovely and tender with none of the gaminess I remembered and the sauce was divine, but although the kiddies enjoyed the meal and polished the bones of the rabbit 'wings', I would rather use chicken thighs at less than half the price.
Perhaps rabbit is cheaper in France?


So Dear Readers, have you tried rabbit before, and what did you think of it?