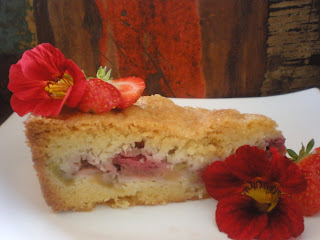 I hate to have to say it, but I'm a rhubarb snob.


I'm very sorry, but I really like my rhubarb to be red.

The variety I planted is supposedly called Sydney Crimson, but they lied, its Sydney Green. Oh I know it still tastes the same, but its just so hard to reconcile myself to the lack of red prettiness that I love to show off in cooking that I've been avoiding picking and cooking it for as long as possible. 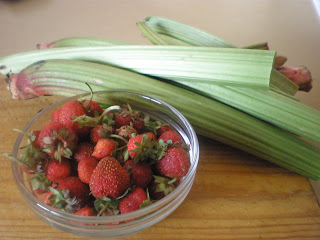 I never knew I was so shallow.

As it so happens, I chanced across this recipe for Strawberry Torte in the Food and Wine Section of the Canberra Times this week. I clipped it and put it in my to-do pile- but then the stalks of neglected rhubarb caught my eye. Mmmmmm.... One of my favourite flavour combinations, I have some little end-of-season strawberries to use up, and the lack of rosy redness won't matter at all. Perfect!

A very simple torte this one with just a few basic ingredients- more like a frangipane mix than anything else really, with the fruits sandwiched in for a bit of something special. Yumm...

The recipe was originally taken from Orlando Murrin's food column, used in the Canberra Times food column, now to be utilized and adapted by me, to share with you. Whew, what a journey indeed, I certainly hope it's worth it! 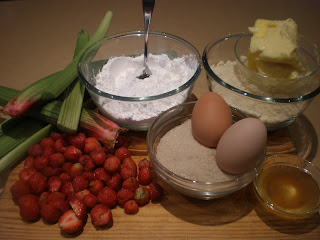 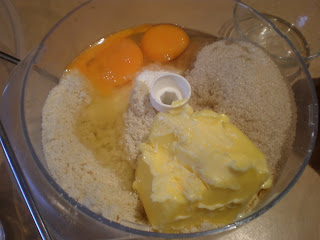 Put all ingredients except fruit and ginger, into a food processor and whiz until mixed. 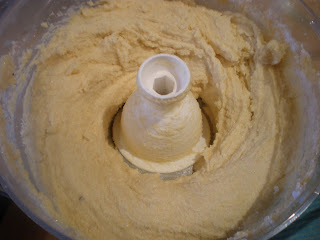 Spilt the mix in two, then pat one half into the base of a prepared 23 cm springform tin. 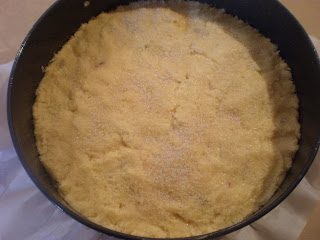 Mix the strawberries and rhubarb with the ginger and stir to coat thoroughly. 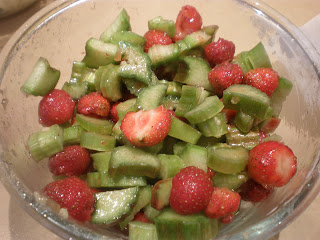 Place a layer of strawberries and rhubarb over the pastry layer leaving a little edge free, then sprinkle with a little extra spoon of sugar. 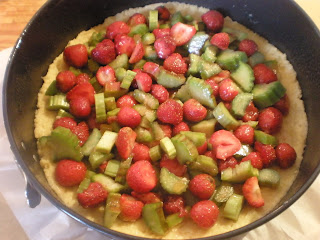 Pat the remaining pastry half evenly over the fruit, to the edge of the pan. Then sprinkle with a touch more sugar to look pretty. 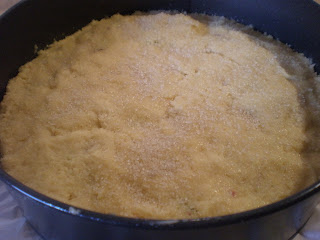 Bake for 1 hour to 70 minutes at 180*C, checking halfway through to cover if browning to quickly. 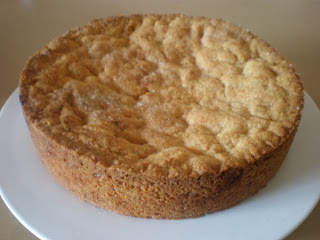 Allow to cool slightly in the pan and firm up a little before releasing and serving.

I was really quite surprised at the delicacy of this torte. Much more dainty than you would imagine. The fruit was perfectly balanced with the pastry, not overwhelmed as I'd thought might happen, and you really could use any fruit at all- maybe apricots would be nice. 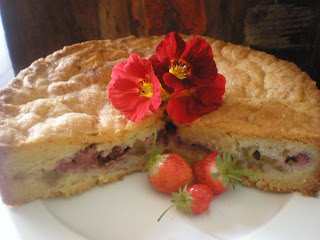 Sweet and buttery, homey not homely, this is a perfect cake for sharing over a cup of Earl Grey tea or warm with custard- not cream, definitely custard. One of the easiest cakes you will come across to make and remember, it's definitely one every good cook, or chef, should have in their repertoire.

So Dear Readers, are you a produce snob, and do you prefer red or green rhubarb?