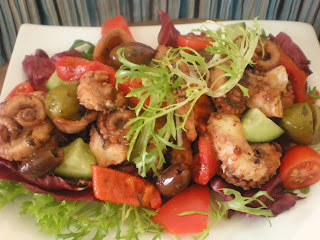 What a perfect name for my Octopus Salad

Soft as butter braised octopus, crunchy fresh vegetables, smooth sweet pepper strips and a tangy vinegar dressing- all tossed together to a Glorious Garden Salad with a bit of Extra Excitement!

They also owned a fresh seafood market stall in the same complex, so the produce really was quite lovely. One of the many behind-the-scenes secrets of this establishment was the cement mixer that was in constant use out the back of the shop. We sold hundreds of dozens of oysters each weekend, and the main duty of the mixer was to tumble the un-opened oysters around in it a couple of times to knock the sharp edges off the shells so the little man who did nothing-all-day-every-day-but-shuck-oysters didn't have his hands cut to ribbons in the first few minutes. In the odd time in between oyster loads, the mixer would be hosed out and loaded up with octopus. Slosh, slosh, slosh, around and around they would go, all the while breaking down the texture and sloshing away the slime. Much easier than the traditional method of beating the octopus on a rock for ages in a rock pool by the sea- especially in land locked Canberra


I bought some medium small fresh octopus at the markets this morning. Not the tiny little baby ones that you can get frozen, or a Leviathan of the deep either, but nice manageable octopups of about 250 grm each. Now you either need to cook octopus super hot and super fast, or slow and lovingly to have it at it's best. I went the slow way, so start this recipe by braising the octopus the day before, or a few hours earlier than you intend to eat it. If you really want, you can also cook the octopus in the pressure cooker for 15-20 minutes if you're in a hurry 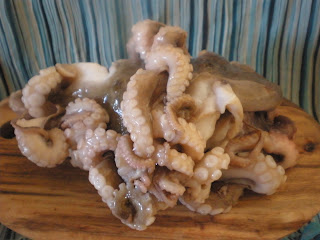 Your friendly Fishmonger will be able to clean the little beasties up for you, but otherwise it's fairly easy- just a bit messy :)
Just split open the head carefully and scrape out all the goopy bits. Be careful though, try not to break the ink sac! There is a beak between the tentacles that needs to be cut out, and you can cut the eyes out too if they bother you 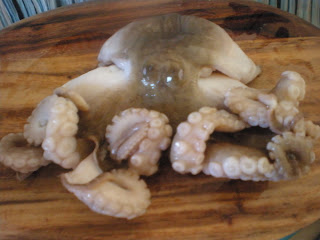 For braising I used 1/4 cup of Red Wine Vinegar, 3 Bay Leaves and 3 whole Garlic Cloves- I didn't bother to peel them 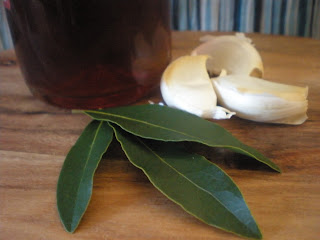 Pop the vinegar, garlic and bay leaves in a pot with the octopus and cover with water 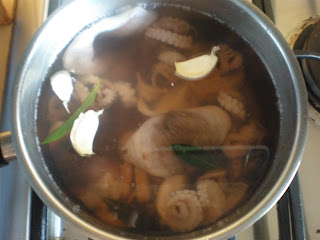 Bring to the boil, then simmer away for about an hour and a half to two hours, or until the octopus is lovely and very tender.
You might want to do this with the window open or with the kitchen fan on. The smell isn't bad or all that fishy- just rather pervasive

The water will change colour as they cook, so will the skin of the octopus too- don't worry though it's still OK, it's meant to do that :) 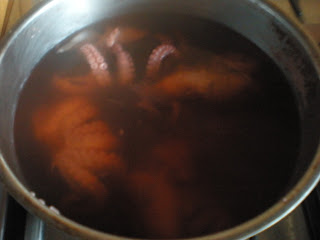 Let the beasties cool in the liquid, then drain well 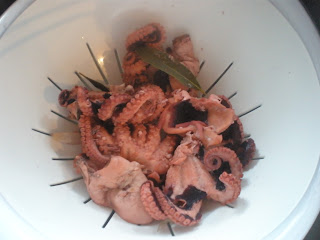 See how the meat has firmed up and gone a lovely pinky colour? Don't worry about the skin colour- if it bothers you, you can peel it off, but that's a lot of work on the smaller ones 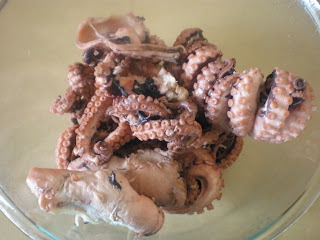 While it cools down, get on with the salad part
I liked the idea of a Greek style salad with capsicum, cucumber, sweet little tomatoes, olives, and I threw in some pepper strips that I had marinating in the fridge too for another texture and more sweetness 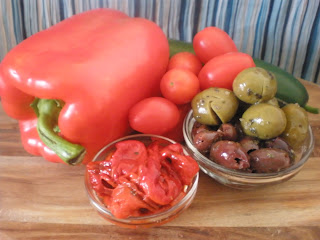 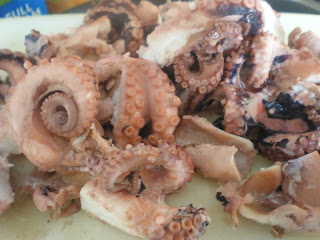 Fry them off in some olive oil on high heat until nicely golden on the lighter bits. I like to use some of the oil that the peppers were marinated in to add a bit of extra flavouring 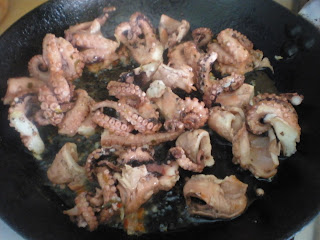 When done, quickly splash in an extra couple of tablespoons of the red wine vinegar and deglaze the pan while tossing the octopus around to coat all the pieces nicely 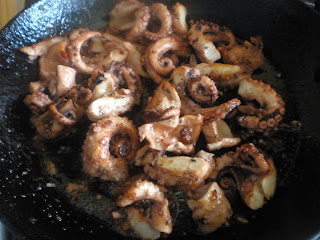 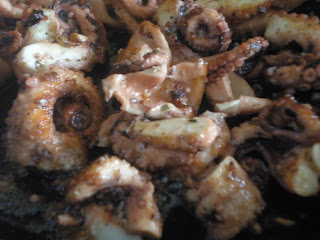 On a bed of nice crunchy greens, place the olives, tomatoes, cucumbers and capsicums then add the octopus. Drape some bits of pepper strips over it artistically and carefully toss around. Drizzle it all with the pan liquid from deglazing and some lovely extra virgin Olive Oil

A lovely hearty salad for lunch or dinner, or you could use the octopus as part of an antipasta platter or mezze plate instead- yummo! 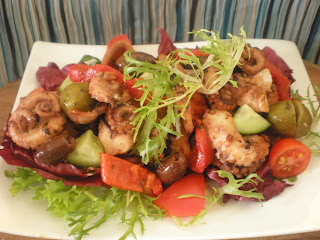 So Dear Readers, would You Like to be Under the Sea, in an Octopus's Garden with me?

We would be so happy you and me, No one there to tell us what to do, I'd like to be under the sea In an octopus' garden with you :)