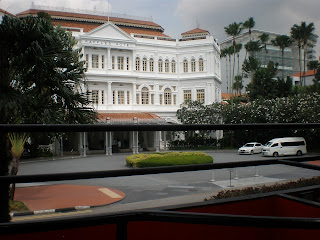 When I was little, we had a painting of Raffles Hotel hanging in our entrance hall

It was of an older Raffles, with rickshaws in the street and not a high-rise in sight. Bell shaped skirts and parasols spoke of a quieter time of elegance and sipping tea daintily to catch up on gossip and escape the tropical heat

That's what I saw when I looked at the painting anyway, and I always wanted to go to try and capture a bit of that exotic elegance for myself. When we decided to visit Singapore for our family holiday, one of the first things I did was to lock in a booking for High Tea at the Tiffin Room at Raffles- it was a must-do. I didn't care what else we missed out on, but no way was I missing out on my touch of Elegance, and I made sure to pack the posh frock to prove it!

Posh frock donned and makeup melting in the pure humidity, we arrived at the appointed time and hoped we hadn't made a mistake when we saw the line of patrons waiting to get in. But not to worry, we were ushered in quickly and efficiently within a very short time indeed

Look at the huge line up of Eager Eaters 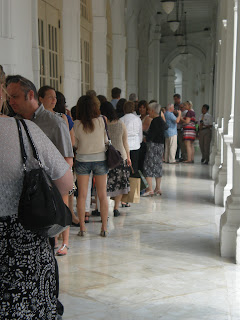 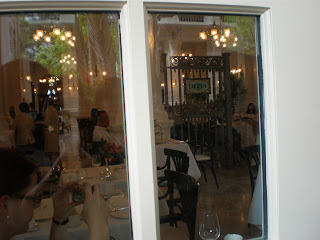 BigJ and littlej were dining with me, and of course they just ate standard fare, no InTolerances for them, so it was good to get some perspective from the Other Side Of The Plate

The Regular menu High Tea Stand, shown here for comparison with the Gluten Free version  - set for three although booked for two.
I guess they are just so busy that the kitchen sends out standard plates regardless of places booked. Warm Scones for the regular menu were also bought around with jam and cream from time to time in lovely baskets by the wait staff. 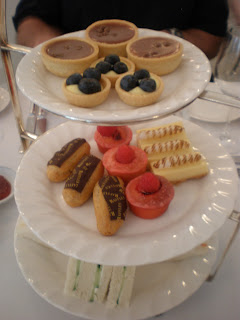 Now the Generous Gluten Free offering- and yes, all of this for me although we only booked for one GF seating. Lucky me I thought! 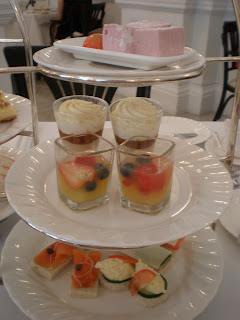 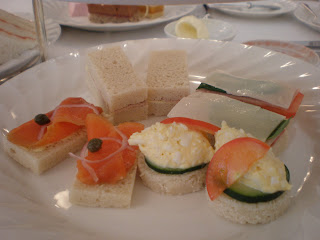 Now I had been unable to find any gluten free bread in Singapore so I was initially pleased to see these here- until I tried them. The bread was very dense and dry despite the fact that they were mostly open faced, and I ended up just eating the topping and leaving the bread bases on my plate. I always wonder if chefs try the gluten free offerings they make, or do any research with customers. There is no reason they should not taste as good as anything else in the restaurant, and if they don't find it palatable why send it out? The only topping that could compete with the bread was the egg salad as it had plenty of flavour and moisture to compensate for dry bread. The salmon on it's own was yummy, but the tuna mayonnaise was a very thin smear of tinned tuna mixed with sweet mayonnaise that tasted like one from a bottle. 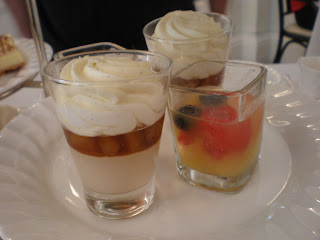 The Orange jelly was nice and refreshing with a lovely burst of fresh tart berries, not overly sugary which made it a nice choice to counteract the sweet offerings. But the pannacotta....was just plain weird. The jellied caramelised apple layer was really quite tasty, but the rest was dreadful indeed. I don't know if it was soy based, some type of dairy substitute I've not tried before, or just plain off- but it tasted curdled with the sour nose-wrinkling effect to go with it. I spat it out and it almost ruined the whole meal. There was no real explanation from the wait staff when I questioned them, just polite apologies and deferential smiles. 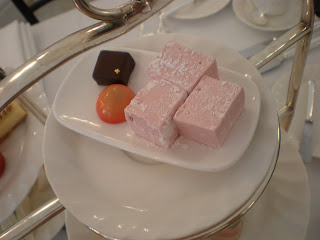 The chocolates were nice and rich, very smooth and creamy, but the marshmallow was the star of the show. Light as a feather and not too sweet, it was gorgeously melt in the mouth with a lovely berry flavour

Selection of Cut-your-own-cakes (not gluten free), Fresh Fruits, and at the end Fresh Berries in Tea Broth 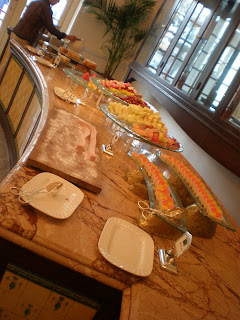 There was a good selection of other cakes available for gluten eaters and they certainly all looked very nice, but it was good to see a gorgeous array of sliced tropical fruits including Star fruit, Pineapple and Dragonfruit too.
Right at the end there was also a great big bowl of delicious berry flavoured 'Weekend in Shanghai' Tea Broth with masses of fresh berries macerating in it. It was unusual in that it had to be carefully spooned up like a type of soup, but it was so yummy that I didn't mind risking my blouse with red drips. 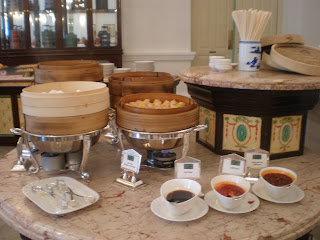 I do have to say that the Regular High Tea was fantastic. BigJ and littlej enjoyed everything so much and there was such an abundance of choice that they didn't try everything and had the luxury of picking and choosing whatever caught their fancy.

With a price tag of $58 per person, I'm glad there was no extra charge for Gluten Free. I was quite disappointed with the selection- especially as a lot of it wasn't very nice and was left languishing on the tea stand hidden by my crumpled serviette. My comments are really just related to the Gluten Free options. I certainly didn't think the food was value for money for my Gluten Free selection and I was still hungry despite having a stand for two..........but I didn't feel completely ripped off... 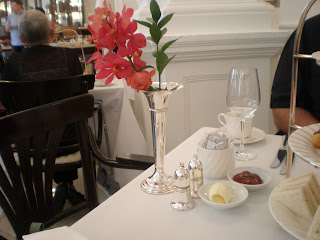 I felt grown-up and special and excited and elegant all in one, as I soaked up the slightly snooty atmosphere that is exuded by Raffles. The service was first class, attentive without being cloying; the staff were lovely and were always ready with a top up of tea; and the room was spectacular with hugely high ceilings and gorgeous architecture that showed the age of building gracefully and proudly instead of trying to modernise it and cover it up with fake facades. It is what it is.

I wouldn't go back to Raffles for their Gluten Free High Tea again, but I'll always be glad that I did.


So Dear Readers, do you have any fulfilled childhood ambitions, and would you be interested in more Gluten Free High Tea reviews? 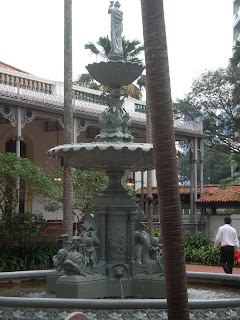