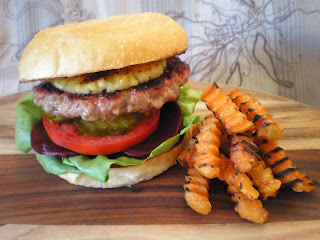 My family are definite Carnivores

Most main meals include a certain amount of meat. It doesn't have to figure prominently, but it must at least give the illusion of inclusion for BigJ to be happy

A few months ago we were watching a cooking program when a certain item was mentioned that made BigJ's eyes widen... a Burger! But not just any burger- the Ultimate Burger! This one was made up of half Beef and half Bacon, thus promising double the dining pleasure and double the meat- his idea of Joy.

I figured if I had to go ahead and make this Perfect Burger, then I might as well do it properly. I read up on some of Heston's hints for burger greatness, and pulled out my trusty mincer- would you like to join me in my journey?.... 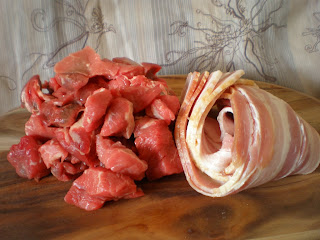 Roughly chop the bacon and add it to the beef. Add a decent pinch or two of salt, scrunch it together and pop in the fridge for an hour or so. This lets the salt work on the meat proteins and helps it bind together and draw out some of the moisture from the meat 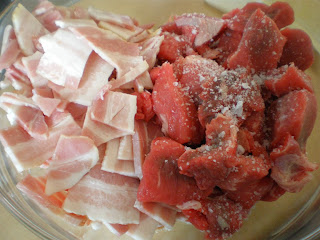 After an hour or so I popped the meat into the freezer for a while to firm up. This will help make mincing easier and also stop the bacon fat from going pasty and mushy as it grinds 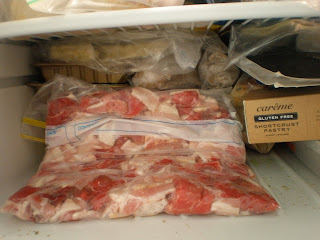 Just for the sake of experimenting, I decided to try two methods of mincing my burger meat.
For some, I just chucked it all in and ground it up to a nice coarse mince 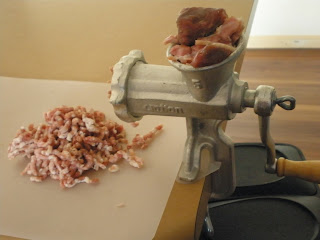 Beef and bacon all snuggled up together cosily 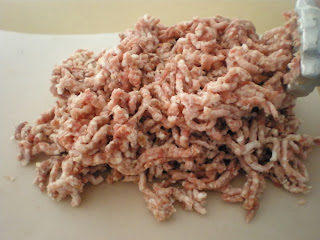 For the rest though, I wanted to try Heston's method of keeping the mince strands long and straight. You catch the strands as they come out the mouth of the grinder and then wrap them firmly in cling wrap and chill to let them set. You then slice the mince into rounds across the strands, so as you bite through them they break away naturally, resulting in a much more tender burger. OK.... it was a bit fiddly, but not to hard to accomplish if you're not in a rush for dinner 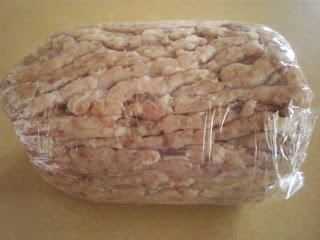 Form your meat into nice round patties, and let them set in the fridge for a while to firm up 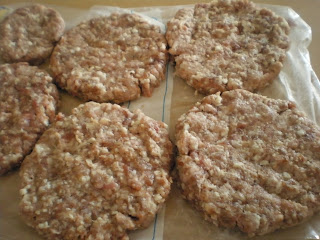 While your meat is chilling it's time to get to the other Fancy Fillings!
I chose Butter Lettuce leaves, ripe juicy Tomatoes, sliced Dill Pickles, and good old tinned Beetroot rounds and slices of Pineapple 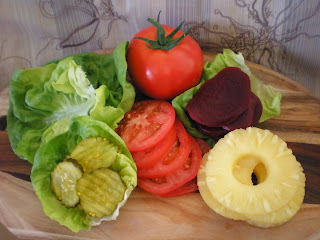 Fry the meat off in a hot pan until just cooked through. The patties will be a bit pink in colour due to the bacon in the mix, but don't worry about it
The smaller patty is Heston style and the larger one is plain 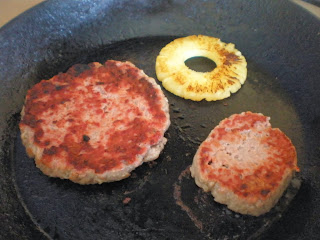 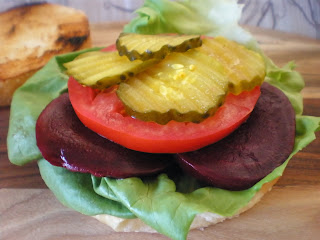 Pop on the patty and pineapple and dig right in!
I served my burgers with some baked Sweet Potato Fries and a variety of sauces and mustard for slathering- Yummo! 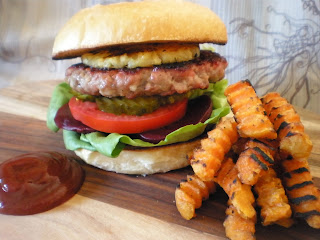 Ok, what did I think of the different patty styles?

In the front is the plain burger. The pink bits are just the bacon, it's definitely cooked through don't worry. The taste was great, with the coarse mince allowing you to get a definite mix of both beef and bacon without the two blending totally together. It wasn't tough, but nice and toothsome with just a bit of resistance. If they were overcooked I think they would go quite sawdusty though.

The back patty is Heston's. It was most definitely a gorgeously soft texture to eat. Your teeth just slipped through the strands and the meat seemed to require hardly any chewing at all. If you want to impress, or if you have the time to go to the effort I would certainly recommend trying this technique. The whole family voted it to be the winner hands down! I guess maybe he really does know what he's talking about :) 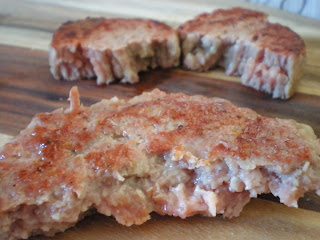 What did I think of the burger as a whole though? Was it worth the Big Build Up? Well.... it was OK. There was a nice bacony overtone to the whole thing and the fat kept the lean beef nice and juicy- but you missed the crispy, browned, rim of fat, wholeness that a rasher of bacon gives. I think having that slice on top of your burger patty makes it seem a bit more luxurious as a topping, rather than just being an extra ingredient.
That's just my opinion- BigJ loved it and said we could fix that by just adding lots of extra bacon on top of our Fifty Fifty Burger next time! 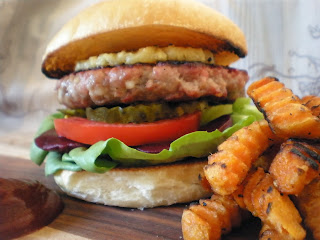 So Dear Reader, are you a fan of bacon and what do you like to put on a burger?