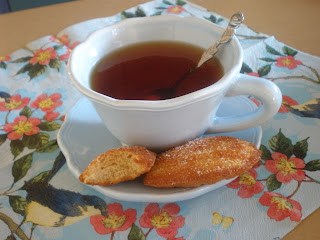 It was one of those days...

I have been wanting to whip up some little Madeleines for ages. They're such sweet little cakes, perfect for tea drinking and dunking, and perfect for MiddleC who's a total French Freak too.

There seems to be a lot of controversy on what makes up a traditional madeleine, as I found out upon consulting my good friend Google. Brown butter, orange blossom water, almond meal, baking powder, resting, chilling, the 'hump' or not.... the true nature of these little delights was hard to find. Heston had a nice sounding recipe that he said he wooed his wife with, but as that 20yr marriage collapsed recently, that was certainly no recommendation either. 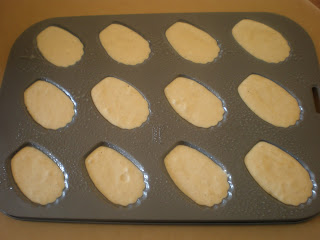 Giving my research up as a bad job, I decided to make my own little dainties in the spirit of culinary law, if not the letter. I decided to flavour mine with Tea and Honey instead. Instead of my beloved Dilmah Earl Grey, I decided to try Madame Flavour's Grey De Luxe instead. Billed as 'classic with a touch of lemon myrtle and lavender' it was certainly worth a cup or two, and sounded like a lovely addition to my batter.

Attempt Number One:
I happily reviewed my collection of recipes, and cobbled together a creation of my own that seemed to have all the same ratios to fit the bill, but with my gluten free and flavour profiles filled. I browned my butter, made my batter, the eggs were slightly flat, but pressed on. I decided not to rest the batter, as the only reason I could find for doing so was to relax the gluten- and that wasn't a problem for me now was it? I filled my pans, the batter was a little thin looking, but we'll see... and baked away.

This was the result: 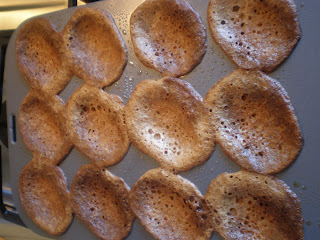 Ok, these things happen, and I was trialling a new recipe, so I added more flour next time, and reduced the baking time by a fair bit and waited 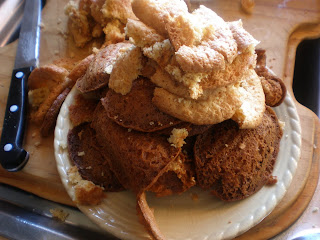 Third time lucky, right? I played around this time with the ratios. Less butter, more eggs, sugar and flour. All went well until-

My eggs just wouldn't whip enough. The beaters and bowl were perfectly clean, the eggs were room temperature- i leave them out overnight, the weather was perfect- no humidity to speak of.... but no fluffing, no ribbons... Arrrgh... I wasn't wasting any more ingredients on the little buggers, even though I buy them in bulk, this was becoming an expensive process. I beat the eggs for as long as possible without exploding my Kenwood, then continued.

I made quite a few changes to the method this time.
I added a bit of baking powder, just to help out those stubborn eggs,the butter mixture was cooled in the fridge, then thinned out by mixing in some of the eggmix before folding through, and the batter was rested at room temperature for an hour.
OK, I whacked the pans in the oven in a kind of calm despair. If these didn't work, at least I had an interesting story to blog, and waited.

I set my alarm and went into the other room. I wasn't going to sit by the oven door and let the batter know how anxious I was. Confidence is one of the most important ingredients in baking, and I wasn't going to let this one rattle me!
Riiiiiiiiiiiiinggggggggggg........ I raced-I mean walked sedately to the kitchen and opened the door... Yes! There they were, golden beauties with a perfect rise and springing back when lightly pushed in the middle. I pulled them out, let them rest for a couple of minutes, then turned them onto the cooling rack. Risking a burnt tongue I couldn't resist ripping one apart to taste and to check for texture. Oh, I was happy. At last. 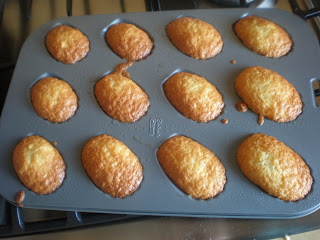 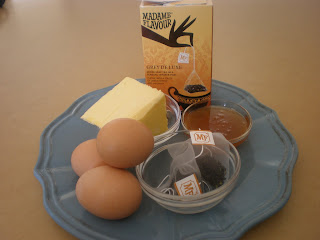 Place the butter in a pan and cook it gently until it changes colour to light brown- but be careful not to burn it. Add in the tea part of the teabags, and the honey, and let it infuse for 20 mins or so as it cools down. Strain it through a fine strainer to remove the solids. Pop it in the fridge to get cold, but don't let it go solid. 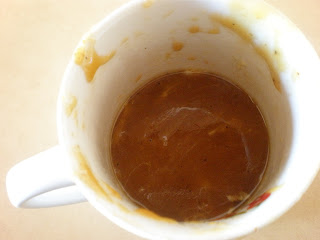 Beat the eggs and sugar together until they're nice and thick and fluffy. They should pretty much triple their volume, and leave a thick ribbon if you drizzle some of the mix over the batter. 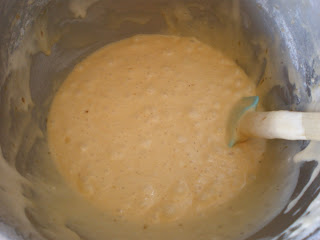 Sift the flour and baking powder over the eggmix, and together with the butter mix, fold through gently until it's nicely combined. Make sure the butter mix doesn't sink to the bottom of the bowl and hide.

Leave the batter to stand for at least an hour.

Put good teaspoons of batter into greased Madeleine pans, and pop them into a 180* oven for about 7 minutes. Now the time may vary slightly- every oven is a bit different, but the cakes should be puffed and golden, and if you poke them gently they should be slightly resilient.

Pull them out. Let them rest a minute or two, then put them on a cooling rack to cool a little. 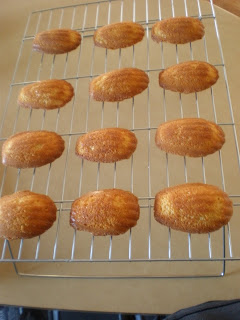 Madeleines should be served fresh and still a little warm from the oven, a bit like doughnuts. They still taste good colder and older, but it's not the same as brand new and wafting warm breath straight from the oven to you.

Sprinkle them lightly with icing sugar and enjoy with a well earned cup of tea. Of course you will use the tea you created them with, and if it's not as sublime as Dilmah, it's a pretty close second. Dunk the dainties in, and relax.... breathe in the scents of honey, bergamont, and other tea tasting goodness, and nibble and sip until sated.

Who needs yoga when you have a good cup of tea? What do you think Dear Readers?