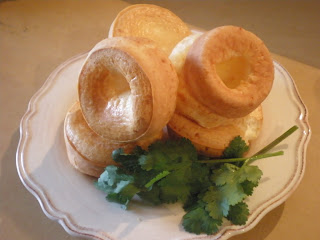 Well, it's a recipe I've meaning to make for a while now, and was finally spurred into action by the latest 'Feast' magazine.
Feast magazine is one of the latest foodie/cooking magazines, released by SBS, and with the by-line 'Experiencing life through food'. They have only been going for 2 months, but I like them so far and am enjoying the international focus you would expect from  multicultural SBS.

But I still haven't explained Pao De Queijo, have I?
Well it's a Brazilian cheese bread recipe that's naturally gluten free! And yummy as well, win-win. They're little baked buns that are usually eaten for breakfast or as snack food during the day. They're sold at street vendors, bakeries are even sold as pre-packaged mixes like cake mixes from supermarkets. 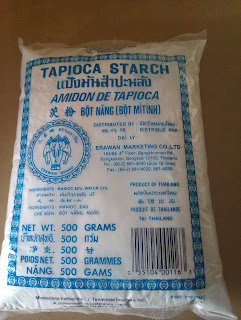 The bread is based on Tapioca flour. Now, you know I like to keep my recipe mostly accessible with mainstream supermarket ingredients, so don't worry, you can find Tapioca flour at most Woolies and Coles in the Asian food section for just a couple of dollars, or at any Asian grocery store.

The other main ingredient is cheese, but as we can't get original Brazilian, it can be successfully substituted with aged Parmesan, which is extremely low in lactose, so perfect for me too.

The recipe I used from Feast Magazine is under the heading- My Neighbours Kitchen, and is by Clara Luboss who was lucky enough to have had these made for her by her grandmother, and has had the recipe passed on to her through her mother, so you just know it must be good and has stood the test of time and hungry families! These are always the best ones, finely tuned to be whipped up in a hurry and served to your harshest critics indeed. She states that this is a twist on the traditional recipe, which is usually a much firmer dough and is rolled into balls before being baked. I don't know about you, but a recipe that is prepared in just one bowl, and is ready in 20 mins, sounds like a twist that works for me! 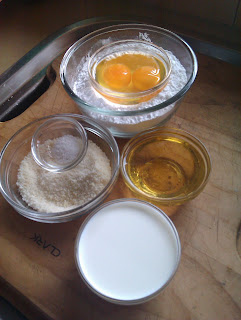 Mix all ingredients until smooth. It's recommended to use a blender, but just make sure it's lovely and smooth. 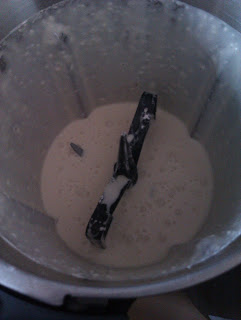 Tapioca is a very, very fine starch even more so that cornflour, so be careful not to turn the machine on in a hurry and have it waft all over the kitchen dusting all surfaces liberally! Not that that's ever happened to me, of course :) 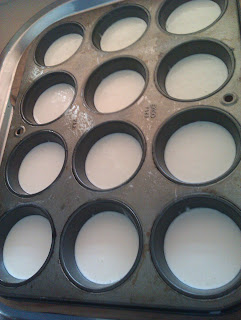 Spray two standard muffin/cupcake pans with oil, and fill them 3/4 full with the batter. I made a half quantity of the batter, and found it filled one cupcake tray perfectly. The author recommends the full recipe will fill 15 holes, so she must be a bit more generous than I. 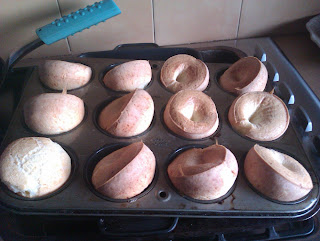 Bake for 20 minutes, in a 180*c oven, or until golden and puffy, and cooked through. 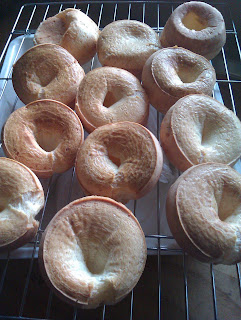 Now these were lovely! They practically jumped out of the pan when cooking, and had developed some interesting designs as they puffed up.

The inside was a loose web of stretchy holes that reminded me of a lovely fresh yeasty bread, and the cheese gave it a nice flavour and added some chewiness to the crust as well.
I certainly don't think it would be traditional, but next time I make these, I'd love to add some garlic in the mix as well, and even some fresh finely chopped parsley or chives too. The lightness and puffiness of these little buns is glorious, and would be a nice change from savory scones for an afternoon tea. 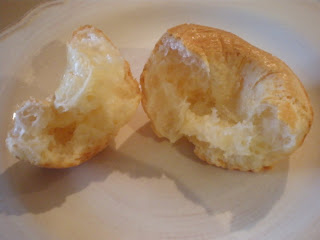 Clara Luboss claimed that she was a lucky child, and I certainly think she was. With a wealth of her grandmothers recipes like this behind her, and the opportunity to share them with the rest of us through Feast Magazine, I think we are too.

So my Dear Readers, have you a favourite recipe passed down from your Grandmother?
Posted by The InTolerant Chef ™ at 5:48 PM