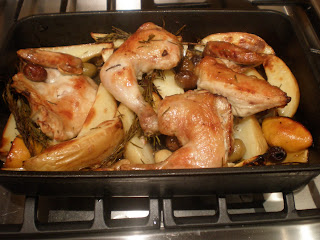 Do you happen to know Newtons Second Law?


I was recently asked to explain this law by littlej, who is a very bright bunny indeed. Never one to admit defeat (or failings) I replied "Never Eat More Than You Can Lift" For this attempt I received a raised eyebrow, and one of THOSE looks that only a young girl can direct at her mother. Thinking this was the end of it, I thought no more about the conversation until confronted with an indignant child, with a detailed project sheet all about Newton and Rocketry. Apparently littlej had checked my answer with her science teacher- and she hadn't been impressed either.

Ungraciously declining my offer of help, little went on to receive an A for her assignment. She is doing amazingly well at school actually, and she and her school team have just won the state final of a very prestigious academic competition. This means she'll be travelling interstate to compete against teams from all of Australia and the Pacific region- and that we're fundraising like mad to support them. 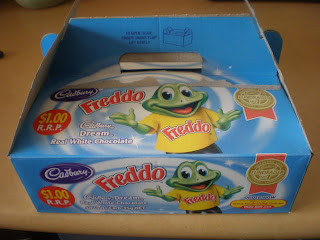 Anyway, to celebrate her achievement, littlej requested one of her favorite meals 'That Lemony Chicken Thing' You can see why we are so proud, she articulates beautifully :) So to prove that I do know quite a bit about food science at least, last night I cooked up littlej's Winner Winner Chicken Dinner with Lemons,Olive and Rosemary for tea. 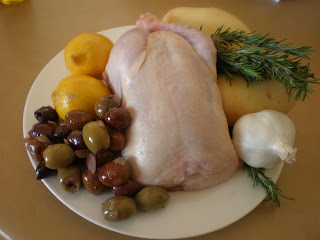 I'm not giving exact measurements for this recipe, it sort of grows organically depending on your families taste preferences. Mine loooves the sweet puckeriness of lemon, and the slight salty bitterness of the olives, so I add quite a lot. Your fanmily might like a bit less, that's OK too. 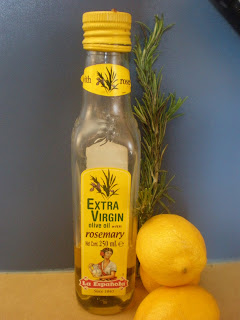 1 chicken, or a selection of chicken portions would be fine

A couple of fresh Lemons for slicing, and one for squeezing

A bunch of Rosemary

Mixed Olives- I prefer the milder green ones for this, but littlejs likes black

A glug of nice White Wine

Don't add salt, as the olives leach salt as they cook


My first job was to chop the chicken up into serving portions. This was a pretty small chicken so I just went for quartering it. O f course I could have left it whole, but I wanted it to cook fairly quickly tonight.

The easiest way to do this is to use kitchen shears or strong scissors.
Place the chicken breast side down on a cutting board with the chickens tail facing you. 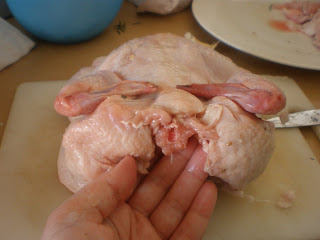 Find the backbone, and cut alongside of it, across the ribs, all the way to the end.


Do this again on the other side, and you can open out your flat chicken and use the bone for making stock or feed it to your dog. 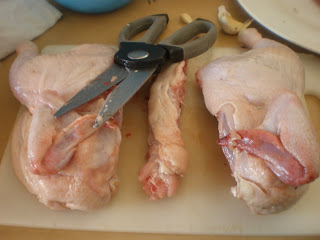 Cut through the side of the chicken diagonally between the top end of the drumstick and the ribs, all the way across.


Do the same for the other half, and you have two nice portions of breast with wing, and two nice sections of thigh with the drummie. 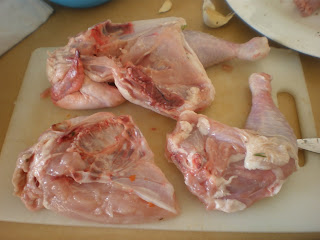 Same with the lemons.

Peel the garlic cloves- as many as you want.

Put the olives, potatoes, lemons, garlic, chicken and rosemary into a baking dish. 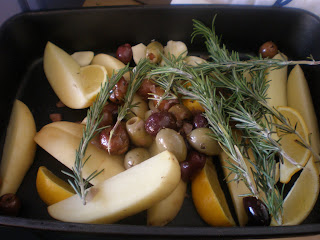 Drizzle over some oil - I was lucky enough to have some rosemary infused oil,

squeeze in the lemon juice and pour in the glug of white wine, then scrunch everything up together to mix the flavours around. You can leave it like this to marinate for a while to let the flavours infuse. 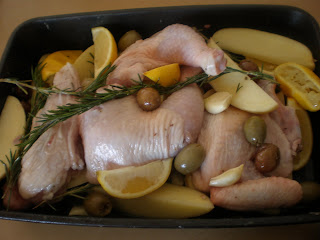 Cover the pan with a lid or some foil, and bake for about 1/2 in a moderately hot oven. This will allow the liquid to start steaming the potatoes and give them a good headstart without drying out the chicken with dry heat.


Pull the lid or foil off, toss everything around to mix well with the pan juices, then bake until the chicken is golden brown and is cooked through.

Serve this up with some greens for colour and a bit of freshness, and drizzle with any remaining pan juices.

This is very yummy. The lemon bakes down and becomes very sweet and almost jammy,but still tart; the garlic mellows, sweetens and softens so it can be squished and spread on the chicken or potatoes; the waxy potatoes hold their shape beautifully but still soak up some of the sweet, salty juices, and the chicken skin browns up for a satisfying crunch of texture.

A great meal that's easy(especially if you you use pre cut portions)yummy, and is cooked in one pan for less washing up. That's certainly worth celebrating even without winning first prize in a competition. Don't you think so? 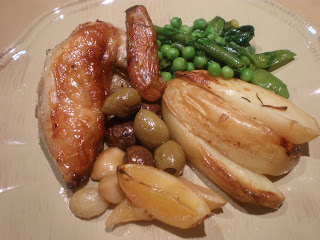 So my Dearest Readers,


what do you like to celebrate, and were you a good student at school?