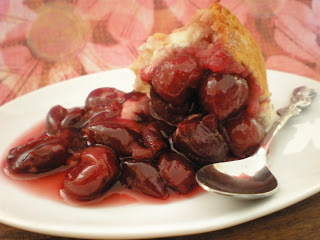 Cherries and Christmas just go hand-in-hand for me


The weather is warming, the carols are playing, and stone fruit is on the market shelves. Definitely Christmassy, and cherries are even such a lovely seasonal colour!

Here in Canberra, with our proximity to the great cherry orchards at Young, we can't seem to go down any main arterial road without coming across a cherry van pulled off to the side offering kilos or boxes of fantastically fresh cherries.
I got mine from a great character who even threw in free pit-spit bags so I could snack as I drove :) A bit trickier to master than he had made it sound!

Now cherries don't keep all that long, so despite highway nibbling, and school lunches, there was still quite a pile that I needed to use up. After a bit of a think, I went for something a bit different and decided to make a Cherry Cobbler.

Cobblers are quite an old, traditional pudding that apparently came about in colonial times due to difficulty finding the right ingredients and equipment to make the usual boiled type puddings. Instead of being enclosed or having a base like a pie, in a Cobbler a stewed fruit filling is covered with a type of dumpling dropped on top, so that when it's cooked it joins up and gives an old fashioned cobbled street effect.

I like food that looks pretty as well as tasting good, so a rustic Cherry Cobbler seemed to fit the bill, as well as involving a lot less hand work making and rolling out pastry for me. Win win, I say :)

Now the first job is to pit the cherries.

You could leave them whole, but that can cause a few issues like broken fillings or choking, so it's probably just easier to get the job done and have a clear conscience.
I used my nifty little pitter tool. You stick the cherry in one end, then press the little sticky bit down and it pushes the pit out the cherry while leaving it whole. Just to be sure and wear an apron though as it can get a bit messy if your cherries are nice and fresh and juicy like mine 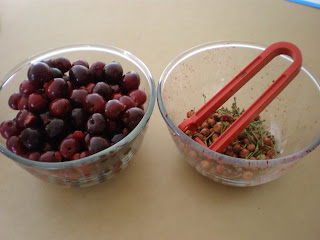 Cherries- I used a good kilo or so
Liquid, about a third to half a cup. It's not meant to be too runny- you could use water, juice, port, wine, but I used a Sour Cherry Syrup from my local deli
Sugar- about a cup or to taste
Vanilla Bean
1 tablespoon or so Arrowroot powder 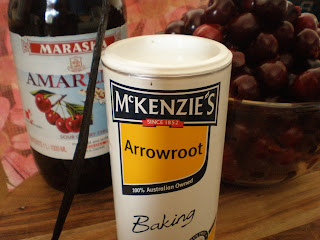 Pop the cherries in a pan with sugar to taste, the split and scraped vanilla bean, and the liquid.
Cook gently until the cherries are cooked and tender, but still maintaining their shape 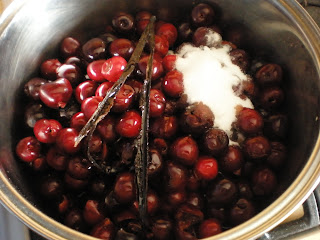 Make a slurry out of a tablespoon of arrowroot and some cold water.
I like arrowroot for this type of thickening as it doesn't colour the finished product. It also sets to a gel type effect that works great in acidic fruit pie fillings, but can be a bit goopy in a meat dish though. It also freezes fantastically without breaking down later. 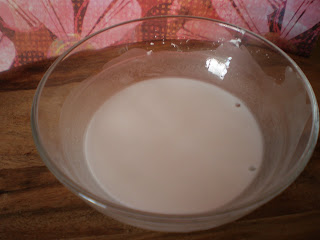 See, gelling up nicely. It sets pretty much immediately, so stir as you go and only add a little at a time 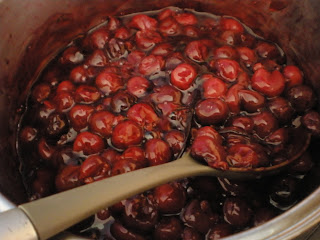 Pop the filling into a greased pie dish 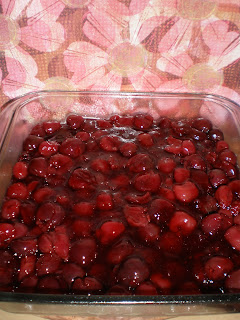 Now for the topping

This was perhaps more muffin-y than dumpling, but if you like you can replace the oil with butter or other solid fat, rub it into the flour, then add the liquids and make it more of a scone type dough 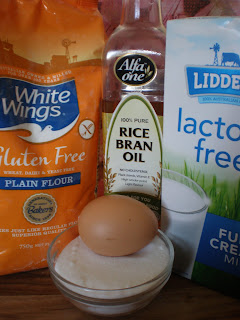 Mix the flour, sugar and salt in a large bowl.
I don't bother to sift them, but I do stir them around a bit with the whisk to mix together and lighten it up a bit as well 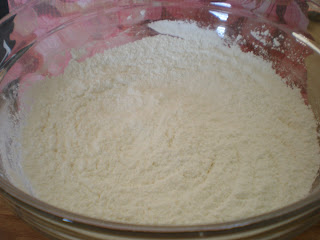 Whisk together the milk, oil, egg and vanilla 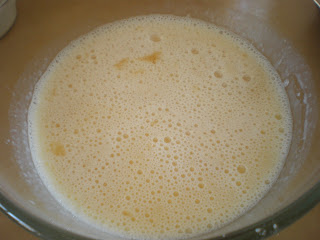 Pour the wet mix into the dry mix, and stir through gently being careful not to overwork the batter 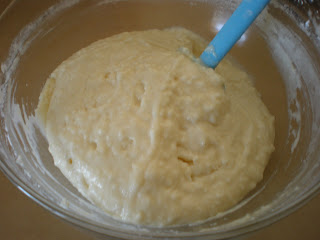 Dollop spoonful of the mix over the fruit base. The topping will expand as it cooks and join up a bit in a nice random fashion.
I also sprinkled mine with some large coffee-style sugar crystals to add some nice textural contrast to the finished dish 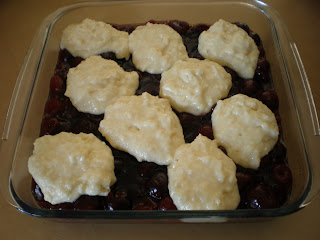 Lovely squishy bottom with the top ready to bake
Pop it into the oven at 200*C for about 25-35 minutes, depending on how thick you've dolloped on the topping. You want it cooked through with no raw batter underneath 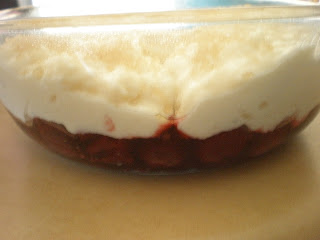 And see? Just like Cobblestones!
A lovely fluffy cobbler topping with the crunch of sugar and rich ooziness of the cherry filling..... Mmmmmm....... vanilla, caramelised sugars, cherry tartness- it all smells divine indeed 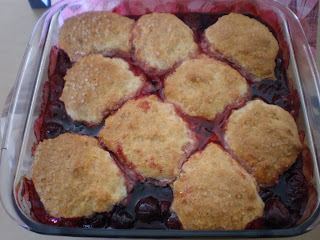 A big spoon full of Cherry Cobbler, with maybe a drizzle of lactose free custard or a scoop of creamy lactose free ice cream is just what I need to get me in the mood for Christmas!

So Dear Readers, are you getting in the mood for Christmas, and what's your favourite cherry dish? 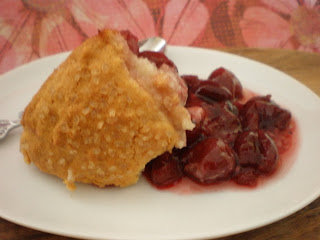